High Priest of Khonshu Rey welcomes back good friend of the show and one half of the VERY awesome Moon Knight-Core Facebook Page, David ‘Moonmin’ Watkins!

The big brother to the ITK community, Moon Knight-Core are raising awareness of Moon Knight on a TITANIC level and it’s great to have David on the show to share his fandom and thoughts on another Bendis issue –

PHASE OF THE MOON: Waxing Crescent

We also announce a new sponsor,…and the winner of last week’s prize give away!!

Tune in, enjoy – it’s Time to Get Your Khonshu On!

Buck and Marc meet up. Marc tells him that he feels betrayed but Buck defends his reasons; he believes that Marc is out of his league and is playing a dangerous game that he is not stable to play. Marc hands over the Ultron head, and much to Buck’s dismay, he cannot believe that Captain America allowed him to keep the head. This proves to Buck that trusting Marc is conceivable. With this is in the air, Marc comes forward with his bipolar disorder and Buck confesses that he felt bad for calling SHIELD. Marc knows a way on how Buck can make it up to him.

At the night club, one of the dancers goes to Snapdragon regarding a man in the champagne room looking to sell the Ultron head. She goes to pay this man a visit with a katana drawn but Buck greets her. He is tired of working for Moon Knight and wants to escape this city. To validate his possession, he gives Snapdragon a piece of the Ultron head tech to her so she can bring to her boss. Twenty Million or he will go to Hydra by midnight. To Count Nefaria’s annoyance, this draws him out to the club. Nefaria grabs Buck by the collar and threatens him but he sticks to his story. Nefaria asks for the head and Buck provides. Using his power, he shatters the head; vibranium does not break. From the sky Moon Knight emerges and strikes down Nefaria. By cracking the head, Nefaria releases a pollen that temporary renders his powers useless. Moon Knight uses this window to lay a few blows but the powers eventually remerge and Nefaria flies away. Moon Knight has a conversation with Steve, Peter, and Logan on how they failed, but from a distance, Maya is recording Marc’s body movement as he is clearly talking to someone not seen.

CHECK OUT THESE OTHER SHOWS I CO-HOST!

Use the code ‘ITKMOONKNIGHT‘ to get 10% off all purchases! High Priest of Khonshu Rey is joined by special guest, Scott Weatherly of 20th Century Geek and Stories Out of Time & Space Podcasts to revisit a classic Moench story and introduction of one of Moon Knight’s more memorable characters –

PHASE OF THE MOON: Waning Crescent

A little bit of Moon Knight comic news, the usual feedback and a good ol’ chat with Scott about upcoming episodes and faves from both of Scott’s awesome podcasts…!

Tune in, enjoy – it’s Time to Get Your Khonshu On!

In a rundown church in the South Bronx, a lone woman drifts within, tortured by memories. She is Stained Glass Scarlet, and amongst the solitude, she contemplates her next move involving a recent prison escapee, Mad Dog Fasinera.

As Steven and Marlene enjoy a cultured evening, their night is cut short by news on the radio of Mad Dog Fasinera in a shoot out with police.

Moon Knight springs into action and it’s not long before he spots the gunfire from the Mooncoptor.

Moon Knight manages to subdue the bank robbers, but Mad Dog manages to escape, killing one of his own men along the way.

Having evaded Moon Knight’s grasp, Moon Knight decides to track down two of the other bank robbers who also managed to escape. They lead him to an abandoned store, but Moon Knight is surprised to see a Woman in Red appear, and enter the store as well.

The robbers are also surprised that their secret safehouse is compromised and are stunned that the Woman in Red knows of it.

Moon Knight intervenes and makes short work of the criminals, but is so intrigued by Stained Glass Scarlet – the Woman in Red – that he is compelled to follow.

Moon Knight confronts her in the abandoned church and Stained Glass Scarlet tells of her origin – how she was a nun, before meeting a reformed criminal Vince Fasinera. How they married but Vince returned to his old ways, neglected his son and ultimately returning to a life of crime; how his last big bank job ends with his death and the mysterious disappearance of all the bank money; and finally, how Joe, left without a father, grows resentful and ultimately criminal, abandoning his mother.

In a final twist, as Mad Dog clutches at the bell rope, the bell sounds his death knell, but also reveals the hidden stash which had been hidden within the church bell for all these years.

CHECK OUT THESE OTHER SHOWS I CO-HOST! 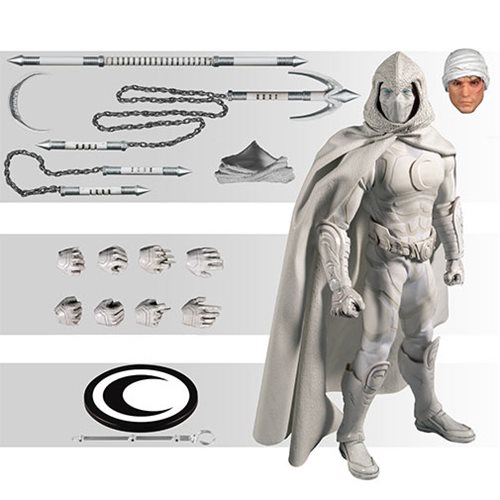